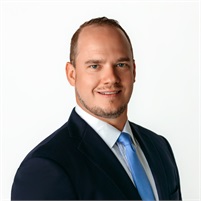 Dustin Johnson CFP®, ChFC® started his career in 2005 as a financial advisor in Denver, CO upon graduating from the Colorado School of Mines where he received a Bachelor of Science Degree in Mathematics and Computer Science. He and his family moved to Florida in 2011 where he spent nearly 10 years focused on leading and mentoring Financial Advisors at Waddell & Reed in the Florida and Georgia area.

Dustin believes it is his role as a financial advisor to help clients achieve their lifelong goals and enjoys making the complexities of financial management a simple task for his clients. After being a mentor in the financial industry, he is excited to have the chance again to work one on one with clients and couldn’t ask for better partners than the U-Vest® Financial team.

On a personal level, Dustin is active at his church, St. Peter the Apostle, by serving on the board of the Men’s Club and the Finance Committee. He enjoys staying active by working out with his wife, Ana, playing with his son and two daughters and hitting the links with friends and colleagues weekly.

Waddell & Reed is not affiliated with any other entities referenced. (05/21)